Battle your friends online in a Retro Tank Party!

It's a wild 2-4 player, top-down tank shooter to keep you trash talking your buddies into the wee hours of the night.

You can even play it right in the browser! (It works best in Chrome, but the download version is faster and more stable than the web version.)

Starting on April 20th, 2021, the game is available both here on Itch.io and also on Steam.

If you buy the game Itch.io, you'll also receive a Steam key!

This is an Open Source game! The code available under the MIT license over on GitLab.

My 2 friends and I were about to play this game but non of us could register, I don't know the problem but it just gave an error.

Sorry about that! It looks like the SSL certificate for the server component expired. I've just renewed it - it should work now!

I also just setup some additional server monitoring to (hopefully) prevent this from happening again! I hope you and your friends come back and try it again :-)

Thanks! We will definitely come back and play your game one day.

Thanks for making this game! I was searching for a Godot game using Nakama to see how well it performs, and I came across this. I love how it just works, real-time.

Though, the controls were not very intuitive—it might have been intended, but I think that the tank sprite should indicate front/back the least.

While using the latest version of Firefox and I could not paste in the email, password nor the match ID, not even through the Paste button. I wonder if it's hard to get Ctrl-C, V working on it. Again, I'm no programmer, but maybe you should try using something like https://xkcd.com/936/ as was implemented on https://file.pizza/ because it looks cool anyway.

In the part where you define the least number of players to play with, “Find at least 2 players”, the word “players” is modifiable for some reason. I think it's counter-intuitive, especially for non-English users.

One last thing: the “X” button. It seems a little too small to have been noticed. Also, it may be misleading to use “X” in this case because X usually represents “exit”, not “back”, so the player may believe that the button is for resetting the whole game. Rather, you should name it with something that represents “back”, for instance “<” and place it in the top left corner.

Thanks for the feedback!

I agree about the tank shapes not indicating front/back well enough. The art assets are from a free asset pack from Kenney.nl, but at some point I think I will modify the tank sprites in some way to make them clearer.

The paste not working in Firefox is a known issue that I haven't managed to figure out yet. It works fine on Chrome, or with any of the downloadable versions for Windows or Linux. I suspect it's a Godot bug.

Your UI suggestions are great! The "players" being modifiable is weird and easily fixed, and the "X" button does really act as a back button, so that's a much better metaphor.

What do the different power ups mean? Is there a special button for them?

S = Spread (shoot 3 bullets instead of one)

There is no special button to use them.

I saw you in the matchmaking queue earlier and tried to join up with you, but it looks like you weren't watching the tab the game was running in. Feel free to ping me  if you want to battle later. :-) 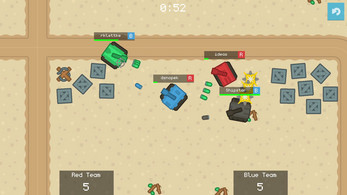 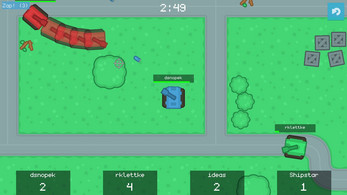 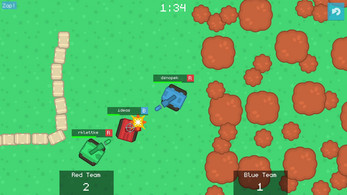 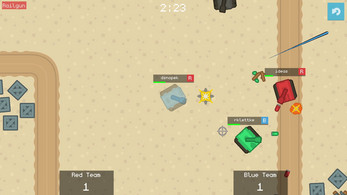 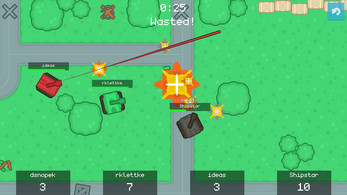 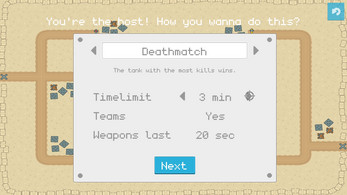